Posted on January 22, 2012 by accidentalinitiations

The winter storm of January ’12 hit right on time. It socked me in good. I was holed up in my Martin cave, unable to run The Tree for several days, eating cheese and drinking red wine given to me by some dentists I bartended for on Friday the 13th. I think they felt bad for me; right before the event, Big W called to tell me they were hiring a new hottie to work my well. We ended it with honor, but afterwards I told the caterers about it and they sent me home well-stocked with comfort foods.

My cowboy nights behind me, I dug into a final rewrite of Accidental Initiations as the snow blanketed Olympia. For a day there I was pretty sure that one of the chapters sucked; the one I think will probably get the most critical scrutiny. I felt mentally, as well as physically, snowed in. And then the inevitable breakthrough, at which point the flakes turned to drops and my Tree, though minimally flooded, was once again accessible to me in my holy (as in, full of holes) running shoes.

When I got to the park I saw that one of my favorite trees, a big old beech tree planted by the park’s namesake Edmund Sylvester, had exploded. Two huge branches had separated from the trunk of the tree and fallen to the ground, splayed apart like the legs of a giant.

Where the branches had been connected, a gaping dark cavity was opened in the tree. 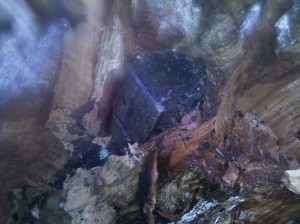 When I looked inside I noticed a block of cement.

At the beginning of Accidental Initiations I write about having placed a stone in a tree, and wondering if this damaged it. The block of cement in the core of this, now mortally wounded beech, has me thinking similar thoughts. How did it get in there?

During the storm, while the tree at Hod was succumbing to ice and gravity, and my teeth were singing with the strain of Geburah’s inspiration for my sixth chapter, the sacred whore from my book was in Bali getting engaged. She called to tell me so last night. I said the right things, and then I smoked a little pot.

If I didn’t know summer was coming I’d be pretty depressed.

3 Responses to Exploding Hod: A Sad and Splendid Vision