Squirrels in The Tree

Posted on December 8, 2011 by accidentalinitiations 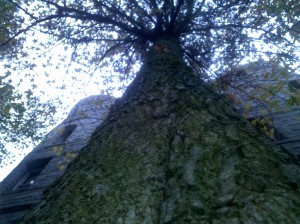 I woke up with a Chuck Shaw hangover. Still in my clothes, bearded with lungs full of coughs. The apartment was stifling so I opened the window at the head of my bed to let the crisp December air in and cool my face. After about a minute, a squirrel climbed the tree outside with a large brown seed-pod in its mouth, and began eating. Putting my attention on the little fella eased my aching belly and I felt a smile on my face. He could see me watching him and for a few minutes we connected.

Today is Tom Waits’ birthday so I shuffled through his discography. My body didn’t feel like being awake and active but I knew that once I got to The Tree I’d be my better self again. It never fails. Waits’ music doesn’t generally inspire exercise and meditation, but today his tunes felt like the voice of my hangover: clarifying my wooziness externally. As I allowed him to growl me through my yoga and other rituals I felt, if not better, then less alone with my nausea.

When I got to the base of The Tree, where I begin my run, I found a dead squirrel in the road. I didn’t even think about the squirrel I had connected with earlier in the day. I was struck by this sad and morbid omen on its own merits. At first I thought I could just leave the corpse where it lay, with traffic rushing by and over it, but I couldn’t. I took a stick with a forked end, which I had fortuitously left at this spot after a previous run featuring several forked sticks, and used it to lift the dead squirrel out of the road and lay it at the base of the tree. 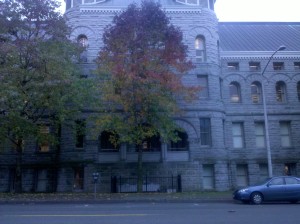 As I completed my run I had squirrels on my mind. I thought about my friend from earlier in the morning and wondered if it was possible that this was the same squirrel I had just gathered out of the road. No way to know but all the way up and back down The Tree I carried Squirrel in my heart. At the bottom I paid my respects one more time and took a picture of the squirrel lying in state. 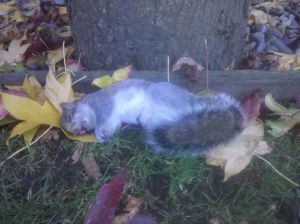 Then the weirdest thing happened, as I walked back up and around the old state capitol building and turned onto Washington Street, I came upon yet another squirrel, this time in the middle of the sidewalk, blocking my path. The little grey beast stared me down. It kept getting closer to me. Sniffing the air and looking me square in the eye as it closed the distance between us. I wondered if this was a friend of the dead squirrel, or maybe the squirrel from the tree outside my window, and then I thought about those internet videos of people getting attacked by squirrels and got scared. I backed away and into the street, giving the squirrel the sidewalk. After I’d passed it I watched the curious creature sniffing tires and looking for something. Eventually it went on its squirrel-y way and I went on mine, thinking of the squirrel thinking of me thinking of it, and wondering if we all look the same to them.

2 Responses to Squirrels in The Tree