Posted on March 12, 2012 by accidentalinitiations

If one arrives at a place of power; at a time when the power is at it’s greatest, and no one else is there…What is one to make of it?

This is what I was thinking, standing atop the Chokmah mound watching the night; full of auroras and borealises; dwindling to dawn while, unbeknownst to me, massive solar storms bombarded the earth. This was my last full moon walk of The Tree before the release of Accidental Initiations and, even after so many perambulations inside this archetypal structure, there was still plenty new to discover.

The galleys for the book arrived later that day. I’ve spent almost every waking hour since then giving them a rigorous last going over with my editor; Alan Abbadessa-Green from Sync Book Press. No way could I have done it without him. He’s been the great music producer/record exec I always wanted to find when I was making records. His energy and attention are limitless and his insights are genuine. Plus, he has George (his “wife”) in the background keeping him (and by extension, me) honest; talking trash and giving (mostly) good note.

Last night, as a test of the readability of the book, I brought the latest draft with me to Quality Burrito; to see if I could read it with distractions. I used to do something similar with my recordings; playing them in a crowd so I could hear the generalities of the music and not the glaring specifics that can obsess you in the final stages of mixing.

It was strange; being there with my book. Several people who are in it were gathered around the bar; drinking in the lounge as I ordered my usual; 2 fish tacos, and an Andras – a drink I designed and they named after me. (The recipe: 2 oz tequila, ¾ oz lime, ¾ oz simple syrup, ½ oz Green Chartreuse. Shake with ice and serve in a pint glass topped with Magic Kombucha.) Jeff Bartone was there, and Peter David Connelly, and Theo Kwo (who makes the Magic Kombucha). I showed Kwo the part in the book where I mention Magic. I told Peter about his being mentioned in the list of artists who have appeared on Radio8Ball. Bartone sauntered over and asked to look at it. As he flipped through the pages he saw his name.

“Did you write about me?”

“Why didn’t you ask me about that? You should have asked me.”

I’m going to have to address this concern a lot in the coming months. I didn’t check with anyone I wrote about to see if they were OK with my including them, and I know, this isn’t altogether honorable of me. But it’s my story and the people in it are real. The things that happened in it are real and I knew if I started asking people, especially in Olympia, what they thought about me telling my story; I would be encouraged not to. This shushing impulse is exactly why I had to write the book in the first place. Olympia is sick with silence.

Now it can be told!

You and me both, brother.  As readers of AI will soon know, Jeff and I each got labeled as “sexists” and were fired from our long-held positions at The Olympia Film Society by low integrity people possessed of greedy ambition who manipulated administrative processes to serve their own aims and NOT the community they purport to represent. If Jeff’s reaction last night was anything to go by, he’s still aching from the experience at least as much as I am, and that’s a lot.

It seems the boring haters at OFS are at it again.

I woke up early this blustery morning, to send off the last edit of AI to the printers, and was synchronistically jazzed to receive this latest petition from members of The Olympia Film Society. 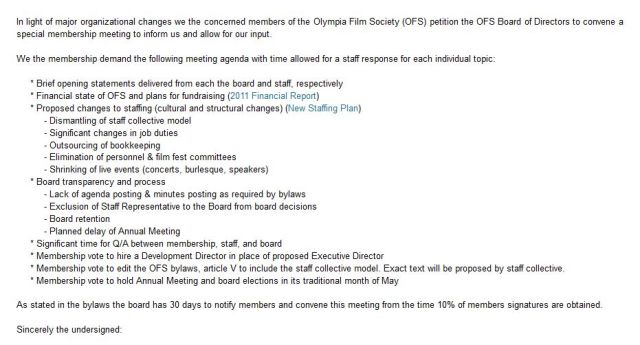 It looks like some of the old familiar characters at OFS are up to the same kind of sneaky power grab I describe in my book. With the above petition, the membership is trying to do something about it. I wish them luck, and I wish Accidental Initiations was here today to aid them in their cause. It should be available online by March 19th (the spring equinox) and I will have copies for sale when I host The Blackberry Bushes Stringband and The Dead Winter Carpenters show at The Olympia Ballroom inside The Olympian Hotel on March 30th.

In the mean time, if you’d like to show your support for Radio8Ball and Accidental Initiations here’s something easy you can do. Go to this link (below) and vote for “Andras Jones” and “Radio8Ball” as your favorite Olympia solo artist and band.

If we get the most votes, they will have to include Radio8Ball as part of the award show at The Capitol Theater on May 5th. If you are from Olympia and want to vote for some other artists, I understand.

I voted for The Noses

and for Scott Taylor

but if you don’t have a more favorite Olympia band, please give me your vote and I promise to make some serious magick when I return to The Capitol Theater stage for the first time in many years.

4 Responses to Something Solar Starting